On Saturday November 11th, the streets of downtown Phoenix were overflowing with craft beer. The 4th annual New Times Novembeer festival was the place to be for any craft beer enthusiast in the valley. With clear skies and a high of 85 degrees there was no better place to enjoy 30 samples of the area’s best brews.  This festival featured over 50 local and not so local breweries, live music and a smorgasbord of Phoenix food truck favorites.

There were far too many great breweries to mention. The usual crowed favorites like Four Peaks, Goose Island and Stone Brewing Company were on site and serving up their flag ship ales. I was pleasantly surprised to see some smaller less known Arizona breweries amassing significant interest from this beer loving crowed.  Breweries like Mother Road (out of Flagstaff) and Huss Brewing Company (out of Tempe) had consistent long lines all throughout the event.

The surprise of the day for me was the massive crowds gathered to sample offerings from The Phoenix Ale Brewery. The booth’s proximity to the limited porta potties may have helped spur some initial interest in this brewery but their delicious and unique beers on draft kept the crowds coming back. You could hear a collective cheer from the crowds when they announced an earlier than scheduled release of their Watermelon Ale.

The only people left dissatisfied with this festival were those who arrived late (some of the more popular breweries ran out of beer less than 2 hours in) and those not attending the Novembeer event that were attempting to navigate the sectioned streets of downtown Phoenix (a minor inconvenience).

I recommend clearing your November 2018 calendar in the hopes that Novembeer will return to Phoenix once again! 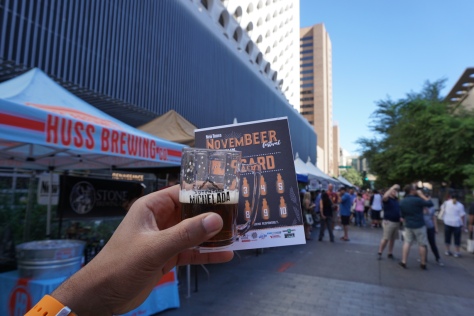 Your guide to arts, eats and adventures in Arizona